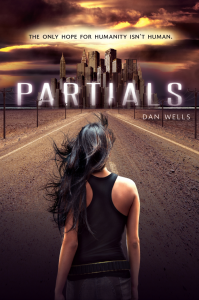 Partials by Dan Wells and book description on Amazon

In a futuristic, post-apocalyptic world, a girl named Kira is a paramedic. She struggles in her daily job as every baby routinely dies of a virus. A long time before, beings called Partials ruined the world so that all babies would be infected with a virus. Then the Partials vanished.

In the current setting of the novel, the government daily fights not only the baby-killing virus but also rebels called the Voice. When Kira’s friend becomes pregnant, she finally tries to stop the virus. Can she travel past the Voice and capture a Partial to stop this virus once and for all?

In his novel, Partials, Dan Wells succeeded in writing a sympathetic yet flawed protagonist. Kira is an idealist. She dreams of stopping the virus, but her idealism can get her into trouble. Some of the other characters seem to blur into the background to me. For example, Jayden appears in the majority of this novel, but I can only describe him as a tough guy.